Tours in Cyprus: add fun to your wedding holiday and get to know the island

Cyprus is a top location not only for a spectacular wedding celebration but for dreamy holidays as well. Picture this; sunshine, golden beaches, long coastlines, vibrant nightlife and delicious traditional cuisine are only a few of the island’s perks, making it an ideal destination. And of course, there is more for the traveller who wants to explore Cyprus further and have a full experience. The best way to do this is through an organised tour in special places all around the island.

Tempted to know more? Let’s discover some options together!

Full day tour to Nicosia, the capital city of Cyprus 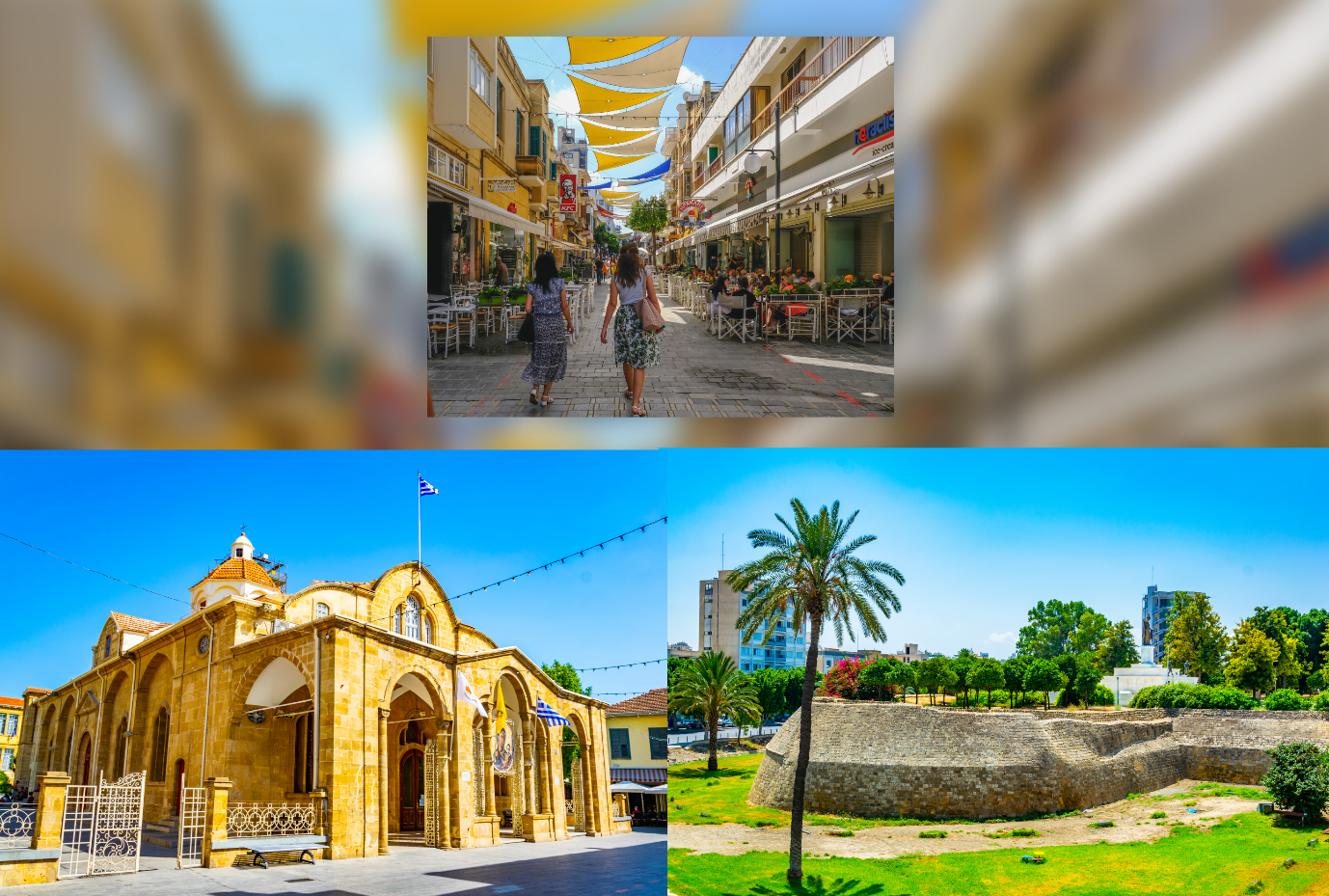 Cosmopolitan, glamorous and bustling, the capital of Lefkosia (Nicosia) is uniquely comprised of an ancient, walled city and a modern, fast-paced metropolis that is the epicenter of the island’s business and commercial activity. It blends the current with the traditional. All at once, you will be transported back to medieval times at the ancient city that is surrounded by Venetian walls and heart-shaped bastions, and yet, just a heartbeat away you are undoubtedly in a progressive, European capital. Once arriving in Nicosia, you will visit the Cyprus Archaeological Museum which is the island’s main and largest archaeological museum. It contains priceless collections from the Neolithic Age to the Early Byzantine period. The collections consist of pottery, jewellery, sculpture, coins, copper objects, and other artefacts, all exhibited in chronological order in the various museum galleries. Passing by the 16th century Venetian Walls you will visit the Cathedral of St. John built in 1662 with frescoes of the 18th century presenting scenes from the Holy Bible and the discovery of the tomb of St. Barnabas. Just next to the cathedral, is the Byzantine museum which contains the richest collection of Byzantine art in Cyprus with over 200 icons dating from the 9th to the 19th century. Then, you will be transferred to the very city center of the old city, Ledra Street, where you will have free time to stroll around. Ledra Street is a pedestrian area with many shops, cafes and restaurants. Just a few steps next to Ledra Street, you can also visit Laiki Geitonia which is a traditional neighbourhood inside the city walls. Houses have been restored to remind the traditional, old Nicosia. It is a pedestrianized area with buildings dated from the 18the century and a combination of residential houses, art shops and taverns.

*The tour can be materialized if the accommodation is in Limassol, Larnaca, Ayia Napa/Protaras or Paphos. 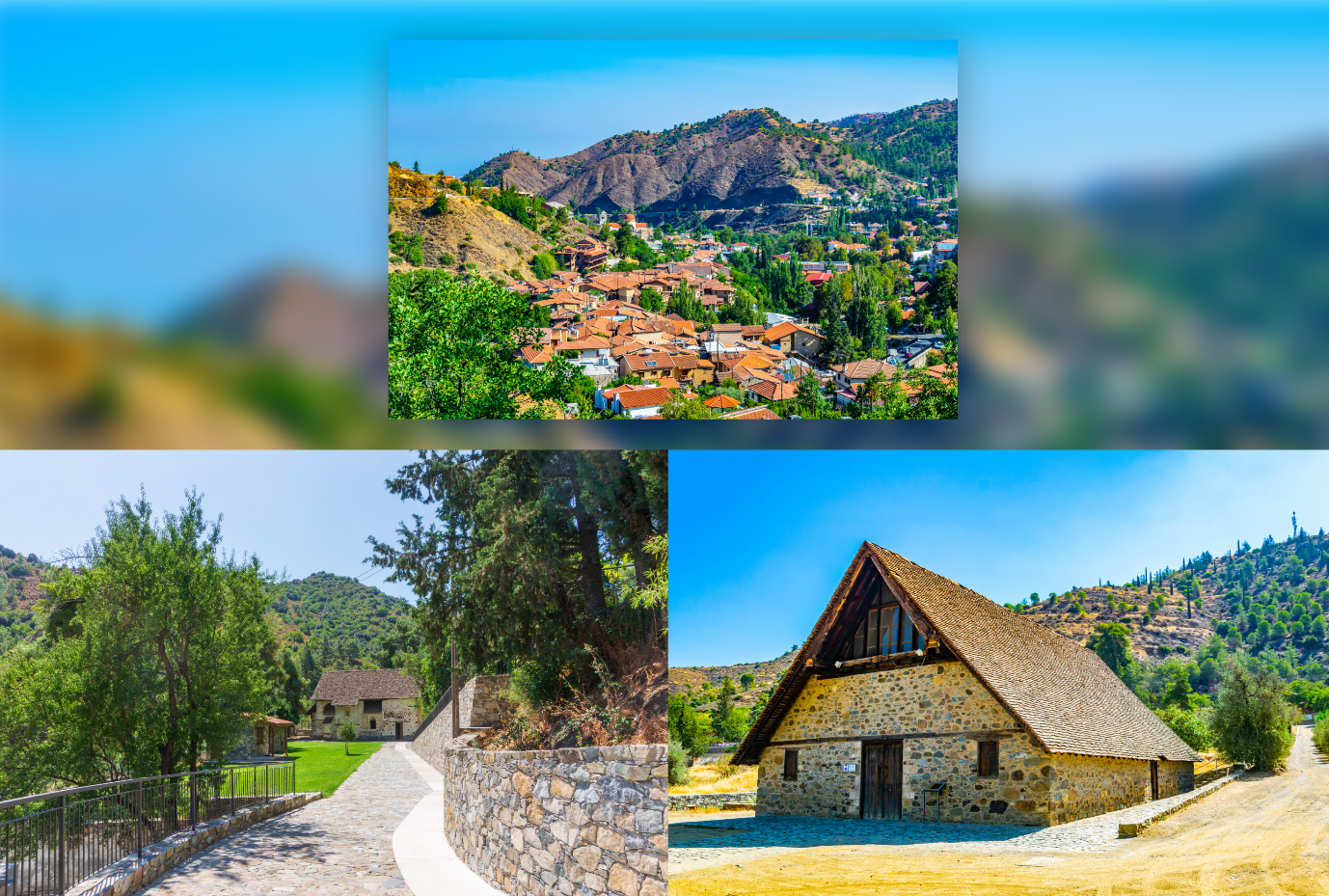 The region of Troodos is characterized by one of the largest groups of churches and monasteries of the former Byzantine Empire. The complex of 10 monuments included on the UNESCO World Heritage List, all richly decorated with murals, provides an overview of Byzantine and post-Byzantine painting in Cyprus. You will depart after breakfast and will arrive at the first village of the area which is the village of Galata. The village has two UNESCO churches the church of Panayia Podithou and the church of Archangelos Michael. Panayia tis Podithou church was built in 1502 and functioned until the beginning of the 19th century, but fell into decline and was finally abandoned after 1821 when the Archbishop and other notables were executed following the Greek revolution. The mural paintings are of the Italo-Byzantine style that appeared on the island towards the end of the 15th century. Then, you will visit the church of Archangelos Michael which is a timber-roofed chapel, painted in the post- Byzantine style of the early 16th century and one of the four painted churches in the village. The journey continues to the village of Kakopetria.

This pretty and picturesque village is a popular summer resort, thanks to its charming character and breathtaking scenery of pine forests that stretch across the Valley. Its old quarter has been declared a protected area, and traditional houses have been beautifully restored. Just outside the village it’s the UNESCO church of Agios Nicholas tis Stegis which is covered entirely in wall paintings dating from the 11th to the 17th centuries and is considered one of the most interesting Byzantine churches on the island.

*The tour can be materialized if the accommodation is in Limassol, Larnaca or Ayia Napa/Protaras. 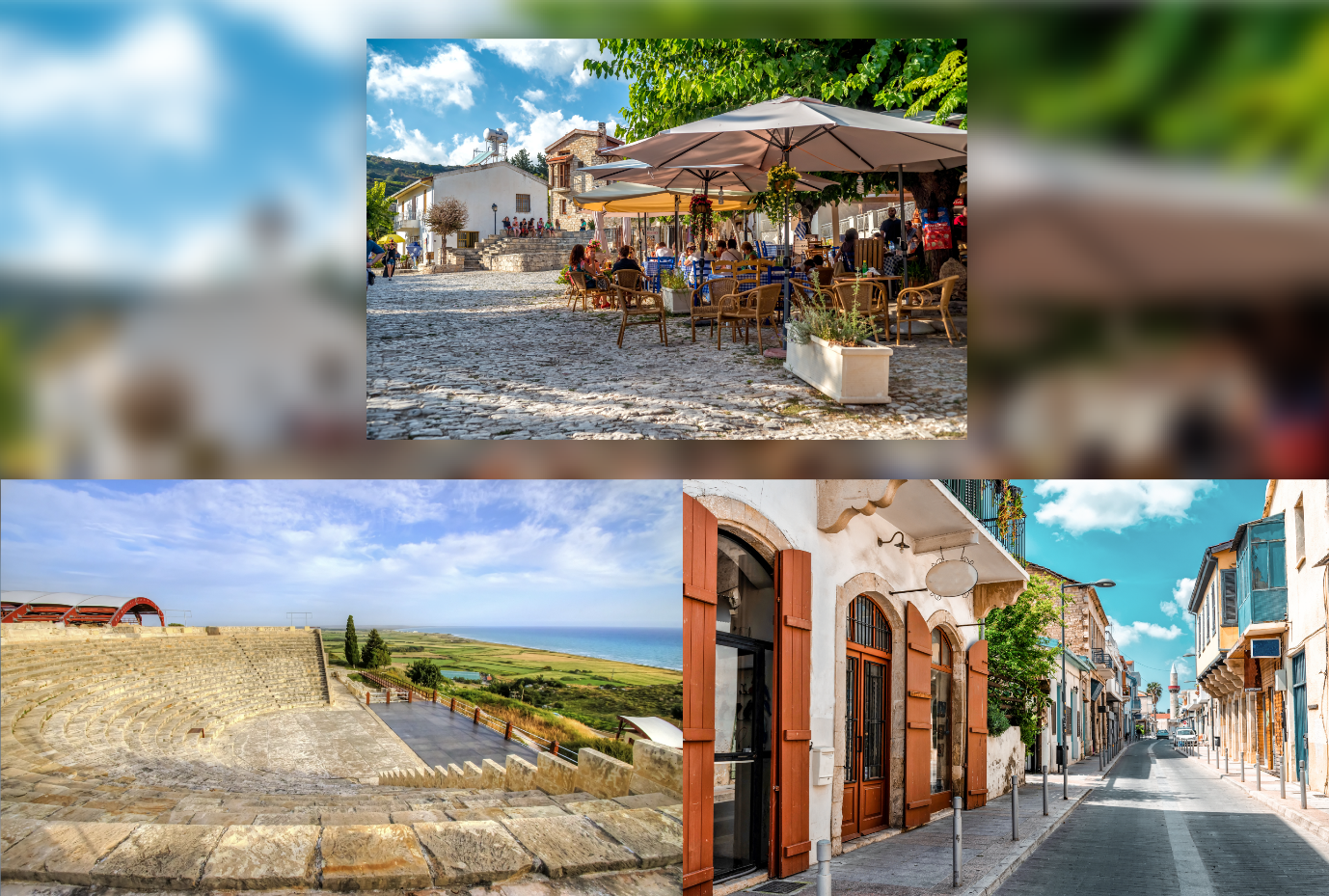 Known as the region of wine, celebrations and ancient realms, Limassol is comprised of its main city - which sits between two important archaeological sites; the ancient city-kingdom of Amathus to the East, and the ancient city-kingdom of Kourion to the West - along with rural areas and charming mountainous villages, where old traditions and crafts are still practiced. Limassol is the second largest city of Cyprus, the home of the island’s main port, and a bustling holiday resort. From its jewel of a marina and impressive archaeological monuments, to the vast 15km coastal strip lined with restaurants, bars, cafes, shops and entertainment establishments, the main city is thriving and colourful. Right after breakfast, we head to the old city of Limassol with its narrow streets radiating out from the old fishing harbor. A short stroll at Limassol Marina, the new jewel of the city will end the visits within the city of Limassol. Heading at the suburbs of Limassol, you will visit the ancient site of Curium. Curium was an ancient city-kingdom and it’s one of the most important archaeological sites of the island. The magnificent Greco-Roman Theatre with its breathtaking view, originally built in the 2nd century BC, is now fully restored and is used for musical and theatrical performances. Within the area, the group will visit the “House of Eustolios” with its stunning 5th century mosaics. The last visit of the day will be at the picturesque village of Omodos. Located within close proximity of one another are the cobbled square, old stone-built houses, the medieval wine press and the monastery of Timios Stavros (Holy Cross), with its old icons and impressive woodcarvings. A wine tasting will be offered at the old wine press or at a local winery.

*The tour can be materialized if the accommodation is in Limassol, Larnaca, Ayia Napa/Protaras or Paphos

*If the tour will begin from Paphos, the city of Limassol will be visited at the end of the tour. 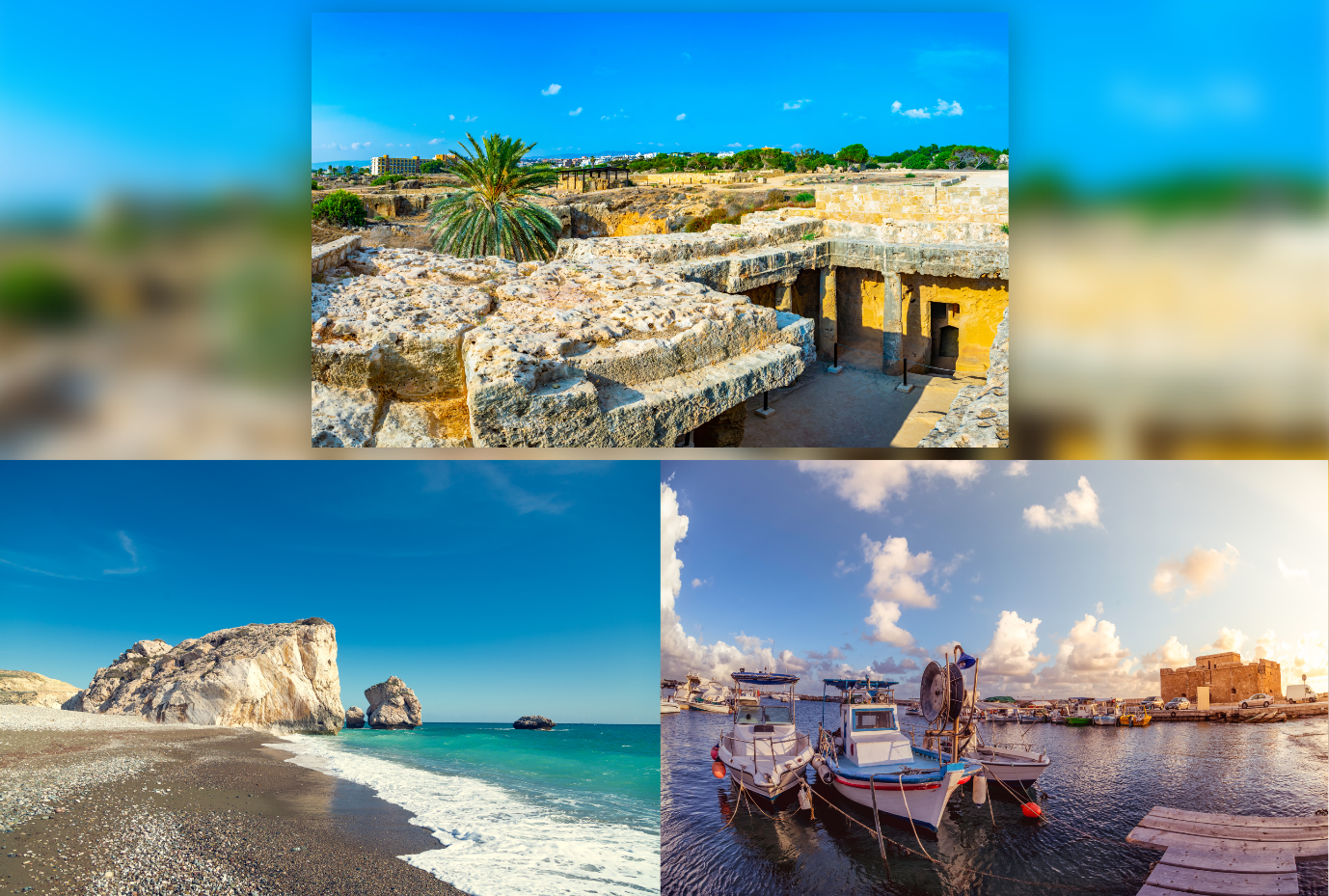 Paphos is one of the most important centres of ancient civilization in the Mediterranean.
The whole town of Paphos, which was the ancient capital of Cyprus, is included in the official UNESCO World Heritage list. Paphos was the island’s capital for six centuries. Departing after breakfast, the tour starts with a visit to one of the most beautiful coastlines of the island, the Aphrodite’s Rock (Petra tou Romiou). According to the legend, the ancient Greek Goddess of Love and Beauty, Aphrodite was born from the sea foam. The area is an interesting geological formation of a hugerock along a coastline. Arriving in the city of Paphos, we will have a first visit at the Tombs of the Kings.
The site is included in the UNESCO since 1980. The monumental underground tombs are carved out of solid rock and date back to the Hellenistic and Roman periods. Rather than kings, it is actually high ranking officials and aristocracy that were buried here, but the size and splendor of the tombs –some decorated with Doric pillars -gave the locality its grand name. Then, we proceed to the very center of the city of Kato Paphos, where we will have a visit at the Paphos Mosaics. They are considered among the finest in the eastern Mediterranean and form part of the Archaeological Park of Kato Paphos, which has been included in the UNESCO World Heritage Sites list since 1980. They were discovered in 1962, after a farmer ploughing his field accidently unearthed one of them. The “Houses” of Dionysus, Theseus, Aion and Orpheus are the villas of four Roman noblemen that date from the 2nd to the 5th centuries AD. Their intricate floor mosaics depict various scenes from Greek Mythology. Free time will be offered to enjoy the charming harbor of Paphos with its medieval castle.

*The tour can be materialized if the accommodation is in Limassol, Larnaca or Ayia Napa/Protaras.

*If the tour will begin from Paphos, Aphrodite’s Rock will be excluded from the tour, it will be offered as a half day tour. 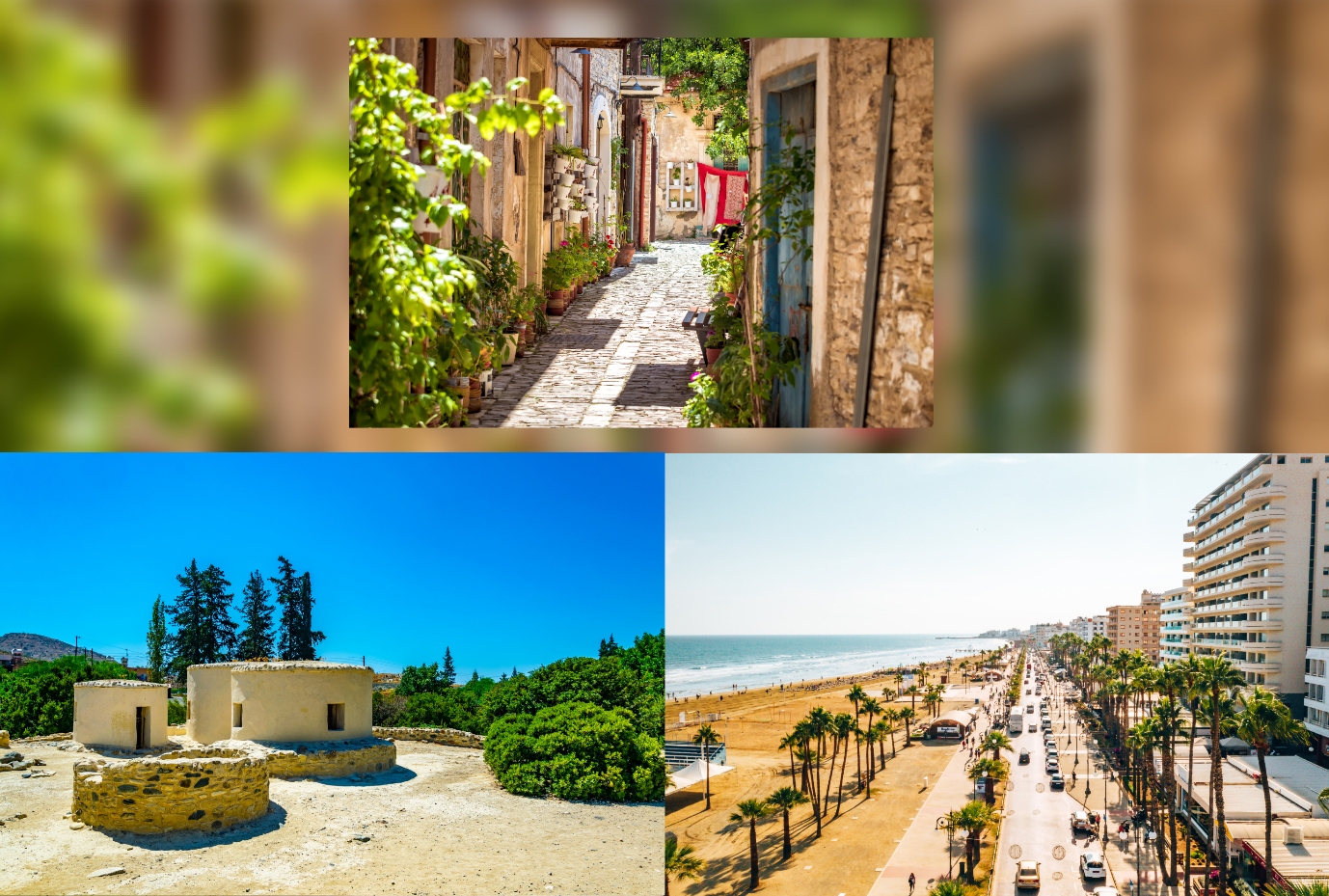 Beautifully compact, easily accessible and truly authentic, Larnaca is the island’s oldest soul; the longest continually inhabited region of Cyprus, with a history that dates back 4.000 years. And whilst it is rich in ancient culture, Larnaca is also a thriving and modern European city that offers the best of all worlds. The first site for this tour will be at the village of Choirokoitia where we will visit the remarkably well-preserved Neolithic Settlement which is also included in the UNESCO World Heritage Site since 1998. Remains from all phases of the Neolithic Age are evident in the settlement, and provide an insight of living conditions in the region during prehistoric times, as well as how the Neolithic culture was spread throughout the region. Then, we move on to the village of Lefkara which is world-renowned for its traditional handicrafts of lace embroidery and filigree silver. The crafts of lace and silver have been practiced in the village since Venetian times. Legend has it that the famous painter, Leonardo da Vinci himself visited the village in 1481 and bought a lace altar cloth, which he donated to Milan cathedral. The character of the village is very picturesque with its narrow, winding streets and traditional architecture of old, terracotta-roofed houses. The last visit of the day will be at the town of Larnaca where one of its most popular spots is the bustling promenade of Finikoudes which is lined with mature palm trees by beach. We will visit the church of Agios Lazaros too, who is being considered the town’s Patron Saint, arriving in Cyprus after being resurrected by Jesus. The church was restored in the 17th century, the gold-covered iconostasis has survived to today and is a superb example of baroque woodcarving.

*The tour can be materialized if the accommodation is in Limassol, Larnaca, Paphos or Ayia Napa/Protaras. 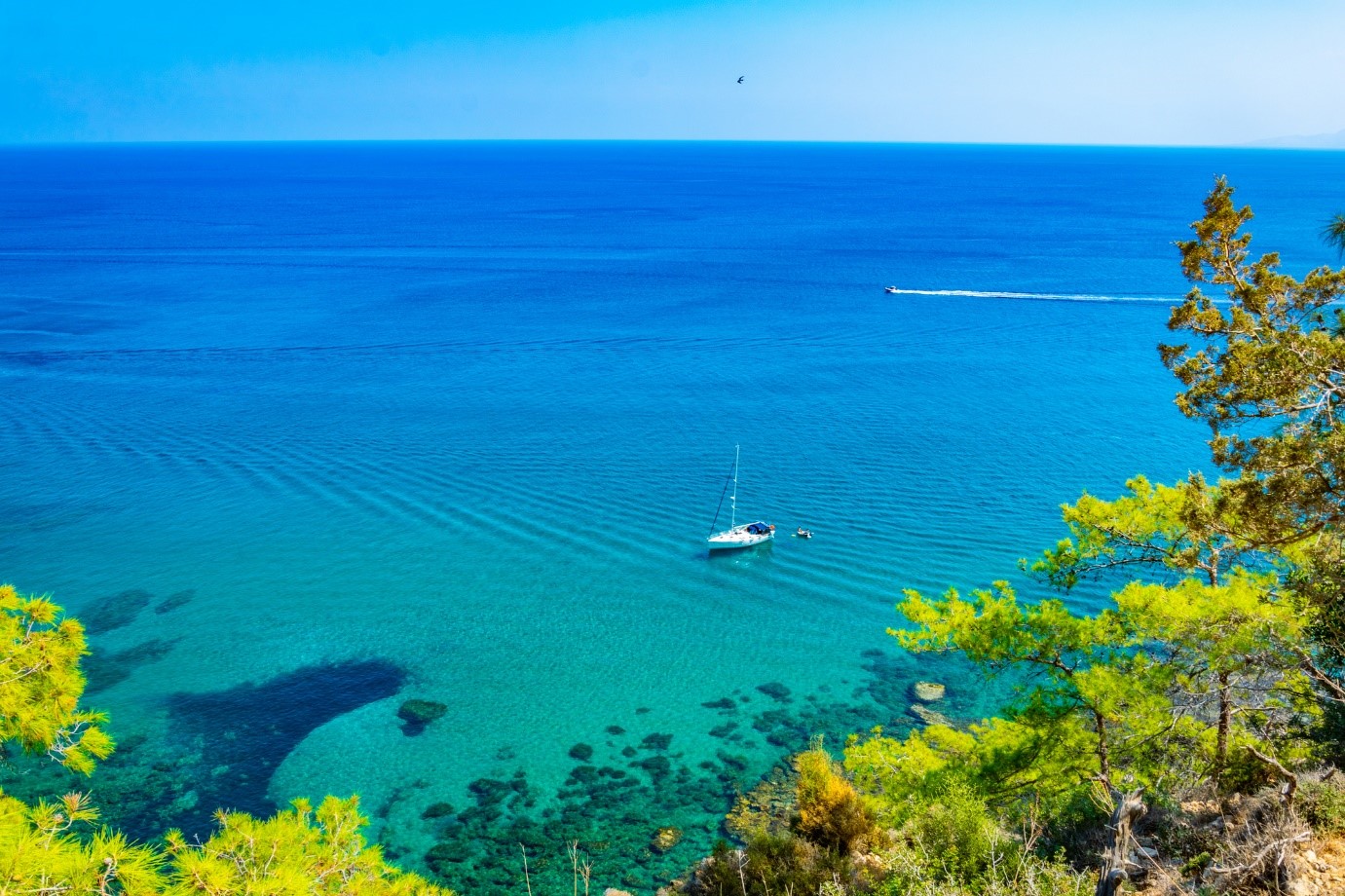 This is the most wanted mini cruise on the island!

Departure from the scenic harbor of Latchi, cruising towards the Blue Lagoon. Drop anchor for swimming and snorkelling in the crystal clear blue waters of the Blue Lagoon. A day made for relaxing and topping up your tan whilst cruising the Mediterranean. The route will include cruising past Cape Arnaouti, the Akamas coastline, St Georges Island, Sea Caves, Coral Bay and Paphos harbor. The mini cruises have a duration of approximately 3 hours (10.30-13.00 & 13.15-15.45) and on board is served fresh seasonal fruits and local wine.

* The tour can be materialized if the accommodation is in Limassol or Paphos.

As you can see, each of these tours has something different to offer and explore. If you want to make this a fuller experience, the best option is a short stay.  Not only you will get some rest, this is also the perfect opportunity to explore more another city of Cyprus.

Sounds like a plan? Let's get in touch and we will suggest the ideal stay after a long day full of activities.

It’s now obvious that there are many things to do and see when in Cyprus. It’s just the great opportunity to combine your wedding day with a full-of-activities holiday.

As you can see, our partner TOP KINISIS offers a variety of options for every taste. If you are interested in any of the above and want to know more about prices, check here for amazing offers!